For Upcoming 2018 Arts & Culture Calendar or email giac05@icloud.com to get listing in advance

Mahalo to all who enjoy and support Art and Culture on Kaua’i
Donate by clicking here.
Register on AmazonSmile.Org & select Garden island Arts Council to receive .05% of your eligible purchases.
Who’s Coming Up on Monday February 19?
Here is the link to EKK on Facebook: https://www.facebook.com/ekanikapilakakou.kauaistyle/

Who would have guessed that a little notation in my back files listing “Johnny Lum Ho and Guitarist” in season #16, 1999, would surface once again on the EKK stage in 2014 as Na Hoku Hanohano Male Vocalist of the year and back by popular demand in EKK 2018. Folks who were blown away by his performance at EKK will have another chance to hear his impressive performance at the Waimea Town Celebration on Wednesday, February 21 at the “Ambassador of Aloha and Music Concert” at the Waimea Historic Theater.

Having just celebrated his birthday 10 days ago, this 38-year-old artist of Japanese, Chinese, Filipino ethnicity struggled for years with his desire, gift and ability to sing Hawaiian music because he was not born Hawaiian. With the encouragement of his local singing buddies from Keokaha and his mentor, Hula Master Johnny Lum Ho of Halau O Ka Ua Kani Lehua, who took him under his wing and did the most to encourage him to start on his musical career, Mark finally got serious about performing and has become a sought-after performer ever since. Just out of high school, he came to Kaua’i in 1999 as Johnny’s “guitarist” in his first stint at EKK. He has also appeared as a guest when his good friends Kellen and Lihau Paik performed at EKK. He has also been a regular performer at the Kupaoa concerts held on Kaua’i.

He is currently working on a new CD but to date he has two CDs — Lei Pua Kenikeni (2010) which garnered him four awards in the 2011 Na Hoku Hanohano and Lei Maile CD (2013) which he dedicated to his grandmother Doris Guerrero who introduced him to falsetto singing. In 2014 Mark was nominated for 10 of 32 categories at the Hoku awards and tied for Male Vocalist of the Year along with Kamaka Kukona. His most recent recording was with Kupaoa for their Christmas Album of the Year CD titled A Gift of the Heart (2015).

He is also very popular in Japan; he averages six trips a year to Japan. Mark pulls strong in his Japanese looks, even more so because of his sumo-tori topknot that he wears atop his head. It must thrill the audiences in Japan when he hits the high notes with his Hawaiian falsetto singing.Amazing Grace/My Chains Are Gone set the tone for an emotional evening of Hawaiian mele, country songs and Christian hymns. This hymn is on the A Gift of the Heart CD. He sang the Hawaiian and English verses of Maui Under Moonlight, which won the Single of the Year award in Na Hoku Hanohano 2014, and on to Hanalei by Moonlight in a soaring falsetto which brought ten hula dancers up to the stage. By the varied choreography of this favorite hula, you know that there are many ways to enjoy Hanalei by moonlight. His falsetto is so pure and clean. He hits the rafters with such ease. It’s exhilarating to hear that beautiful voice coming out of him.

He called on his guitarist Bert Naihe who loves very fast songs. When he said he was going to sing a song about Queen Liliu’okalani, I expected a slow mele but he sang a very lively song complete with super-fast guitar playing. The song Kehaulani was not about cowboys and horses but a traditional mele about the Queen Liliu’okalani’s secret flower garden in Manoa. Mark told him, “You just got a speeding ticket for that song.”

Another very lively song by Bert Naihe was composed by Dennis Kamakahi about the last Queen of Kaua’i. Rain Li’i Li’i is not often sung, probably because it’s such a fast song, but Bert lives in the fast lane so this was right down his track. The beat was so catchy that you could see bodies swaying side to side in their seats. Bert’s got the body movements, the guitar strums, the sassy smile . . . the whole package. Whenever Bert sings, you think you’re at a backyard party. It makes me want to boogey away like my volunteers standing at the back of the ballroom.

Mark’s melody in his next song was beautifully heart-wrenching, Lei Maile,which celebrates a special person in his life — his future wife with whom he will tie the knot later this year. If you look for it on Youtube, you can watch Mark’s unique and hilarious proposal to his fiancée, Leilani Pereira.

Responding to a request from the audience, Mark sang Love Me by Collin Raye, an awesome country singer, recorded on his Lei Pua Kenikeni CD. The message in this song is to stay committed to your loved ones no matter what happens. Most appropriate song as Valentine Day approaches. This seemed to bring out Mark’s pensive mood and you could see him thinking out loud, the light bulb going off in his head, like he was just realizing that we all grow old and everyone has just one chance at making it work. He mirrors the thoughts that we all live each day.

On another celebratory note, he acknowledged that today was the birthday for his bass guitarist Eddie Atkins who has been playing with Mark for a good ten years. His own birthday was about ten days ago and Kellen Paik’s was two days before that. He did a shout out for all the February babies in the house … all good people.

One of Mark’s favorite songs to perform was written in 2004 for his baby girl when she was four years old. KaleooNalani translates to Voice of the Heaven. Mark rolls his eyes when he talks about 12-year-old Nalani — always on her iphone, no longer calls him “Daddy” but just “Dad” with an attitude, and no longer wants to cuddle. Mark gives an audible sigh as he acknowledges his baby girl is growing up. “I think I need to write a new song for her,” says Mark and proceeds to strum some dark chords on his guitar.

Mark is most comfortable singing falsettos and these songs seem to thrill the audience. Bert and Mark sang a stunning duet called Sweet Memory/Makalapua with a different translation of Makalapua by Johnny Lum Ho. Bert and Mark have very different styles of singing so when they blend it so beautifully in this composition, it’s like eating sweet and salty Li Hing Mui.

Mark acknowledged the audience sitting in the side seats and asked them if they were enjoying the Hitchcock view of him from the side. Mark likes to involve the audience. He shared his family’s love for nostalgic music with a 1961 oldie titled Runaway by Del Shannon, asking the audience to join in on the chorus and they came in loud and clear with “…wa wa wa wa wondering . . .” He asked the ladies to sing the chorus and then the men. He decided the women were more in tune but the men were louder, and that the next time he comes to EKK, he is going to ask them to challenge again and see who does better.

When asked to play the beautiful Valentine-red Kamoa ‘ukulele that was going to be given away after the intermission, Mark chose to strum Dennis Kamamahi’s Molokai Nui Ahina while Bert happily sang another very fast song. What a team! It’s great to hear some of the less sung compositions by Uncle Dennis because they are great songs and should be heard more often.

Who won the ‘ukulele this week? A happy Carol Lloyd from Koloa town.

The second half of the program was equally great starting with the title songLei Pua Kenikeni, a wonderful falsetto melody from his CD of the same name. Mark gave us a reality check into what it’s like to be a recording artist. When asked to do a recording for the Hawaiian Airlines inflight video, Mark had to sing the same song over thirty times. Next morning he woke up with the muscles on half his face paralyzed – unable to sing, smile, talk and even eat. Good thing he’s recovered! It’s also uncomfortable for him when other passengers stare at him and whisper, “That’s him,” whenever the video is playing. It’s hard for a star to travel incognito. Get used to it, Mark.

Mark wanted to share a brand new song; he called on Bert and Eddie to play along even if this was their first time hearing it. Mark’s fiancée is a math teacher in Pahala which is a solid one hour of driving, driving, driving from Hilo to Ka’u which is on the very south side of Hawai’i Island. To help her look at the positive side of this daily 52-mile trek to work, he composedMorning Drive about enjoying the beauty along the way – the smoke rising from the Halema’uma’u Crater, the slopes of Maunaloa, the nene geese flying by, the beautiful red and yellow Lehua blossoms along the volcano and the wild peacocks along the roadside. He had just recorded the song this morning with the help of Kellen Paik in Kilauea. Mark loves his island home and shares it in the songs that he composes and sings. Mark sang another song about Honoka’a along the Hamakua coastline.

Bert Naihe has his own version of Noho Paipai/The Rocking Chair Hula. It’s a very different arrangement from one that is often danced by hula dancers . . . very fast! Finally, Mark sang the song I requested. Manu ‘O’o is the perfect song for his powerful rich falsetto. It really is the song that gives me chicken skin every time he sings it.

Mark called on Kellen and Lihau Paik known as Kupaoa to come up to share two songs. They started with Holei, a traditional mele about Kalapana on the Big Island. This duo has many albums under their belt filled with original compositions on which they collaborate. They are the power couple that are in demand everywhere. Lucky they live Kaua’i!

Their second song, Country Party/Hu Ka Good, composed by Alani Woodward, was dedicated to Eddie Atkins for his birthday because Eddie always asks them why they did not sing his favorite song. Well, tonight they did . . . Happy Birthday, Eddie. “Just to get out and party . . . just to get down and party . . . way out in the country . . . people they know how to party . . . shaka guarantee . . . ”

Mark brought the evening to a close with another hymn, Ke Akua Mana E/How Great Thou Art. Time ran out for a hana hou, but the audience joined in for Hawai’i Aloha, still wanting the evening to go on. It’s a wonderful thing to watch their happy expressions as they streamed out of the ballroom. It’s a good thing Mark will be back at the Waimea Town Celebration in a week.

E Kanikapila Kakou 2018 Hawaiian Music Program is funded in part by the Hawai’i Tourism Authority, supported by the County of Kaua’i Office of Economic Development, the Kaua’i Beach Resort, and the GIAC/EKK supporters. Garden Island Arts Council programs are supported in part by the State Foundation on Culture and the Arts through appropriations from the Hawai’i State Legislature and the National Endowment for the Arts. 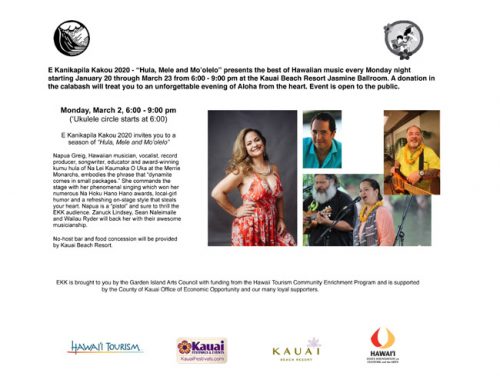