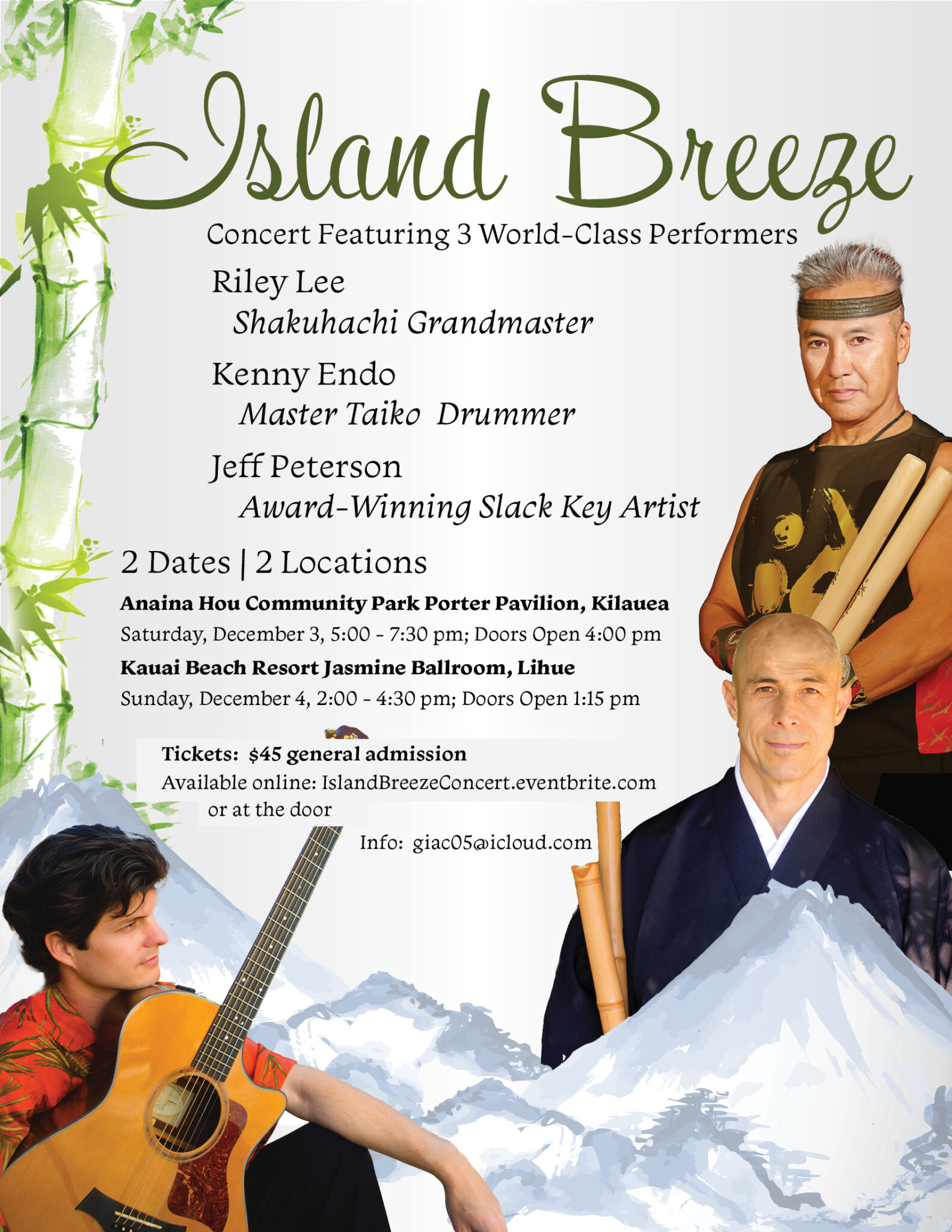 These world-class musicians will once again come together to create a unique blend of music crossing culture and tradition.

Award-winning Hawaiian slack key guitarist Jeff Peterson and shakuhachi grand master Riley Lee joined forces with taiko master Kenny Endo during a weeklong residency in Honolulu in 2012. Each artist conducted intensive workshops and also sought to skillfully blend their individual styles together to create an inspired sound distinctive to the Hawaiian Islands. The trio put together a program of refreshing music as a result of their collaboration and presented it in concert at the University of Hawai‘i’s Orvis Auditorium. In August of 2014, the trio recorded Island Breeze, which was nominated for Na Hoku Hanohano awards (Hawaii’s version of the Grammys) for “Album of the Year” and for “Instrumental Song of the Year” in 2015.

Riley Lee has been playing the shakuhachi (bamboo flute) for over half a century. In 1975, he became the first non-Japanese to be honored with the rank of Dai Shihan (grand master). He has introduced the shakuhachi to a diverse audience as a soloist, with other performers, and through his teachings. He has BA and MA degrees in music from the University of Hawai’i and a PhD degree from the University of Sydney, Australia. Riley has released more than 70 albums since his first LP (1980). His latest three solo albums are entirely of the music of 12th C mystic, Hildegard von Bingen.

Kenny Endo is at the vanguard of the taiko genre, continuing to explore new possibilities for this ancient Japanese instrument.  A performer, composer, and teacher, Kenny is a consummate artist, blending taiko with original music through collaborations with artists from around the world.  In 2022, Kenny toured across the USA performing concerts, conducting workshops, and lectures.  He recently received the Honpa Hongwanji Living Treasures of Hawaii Award.  In January 2022, Kenny was awarded the United States Artists award.

Jeff Peterson was introduced to the rich heritage of Hawaiian music by his father, a paniolo (Hawaiian cowboy) on Haleakala Ranch on the island of Maui. Today, Jeff is at the heart of the Hawaiian music scene and is recognized as one of Hawaii’s most versatile musicians. His passion for the guitar has allowed him to shine as a solo artist and has given him the opportunity to collaborate with a wide variety of artists from Hawaii, across the US, and abroad. His focus on slack key guitar, classical, and jazz music has allowed him to develop a unique and transcendent voice on the guitar while being deeply rooted in the traditions of his Hawaiian heritage.